Overcrowded Yoga, Pink Hair and an Ounce of Kindness: A Story

When I walked out of the third yoga class I ever attended, the teacher followed me. Little did she know that her extra ounce of kindness would go on to change my life.
July 14, 2014

Overcrowded Yoga, Pink Hair and an Ounce of Kindness: A Story

Three Thanksgivings ago, I walked into my third ever yoga class–and promptly walked out.

The free community yoga class on that holiday was just too crowded for me. Rather than trying to fit myself in on the floor somewhere–or get stuck in the back hallway or kitchen space–I chalked the effort up to a loss, turned around and quietly snuck out the front door.

But the teacher saw me.

And then she followed me out onto the street.

The pink-haired, tattooed yoga teacher named Debbie invited me back inside.

“We’ll make room for you up front, just come with me.”

I had taken just one class with her the Friday before Thanksgiving. It was the first class that I had ever attended on my own. Debbie made a point to welcome me to class that morning–she even remembered my name that Thanksgiving when she called for my attention out on the street.

But Debbie counter-insisted. So I went back inside with her.

And even though I was a bit embarrassed that I had tried to “escape” a few minutes before without anyone noticing, Debbie pulled a few strings with her adoring students and tucked me and my mat up towards the front of the class.

The yoga class was great. I left feeling elated. That Thanksgiving afternoon, all throughout my family’s traditional dinner and the ensuing festivities, I felt like a new human being.

Although the yoga left its mark on my feeling state that day, what did more was being seen by this teacher who called me back when I quietly tried to run away.

Honestly, I don’t know if I would have ever gone back to another yoga class if Debbie hadn’t pulled me back in. I’d like to think that I would try again. But part of me suspects that I might have made excuses. Or said that yoga “wasn’t for me.” Or found some sort of rationale to avoid facing a similar experience: feeling like there’s not enough space for you in a room full of people who you don’t know (and who all seem to be on another level with their yoga).

Whether or not I would have ever gone back to a yoga class, what I knew at that moment on Thanksgiving three years ago was that I liked this pink-haired yoga chick.

I liked that she cared enough for a stranger whom she had only met once to leave her own class and implore him to come back inside from the sidewalk.

Part of me knew those three Thanksgivings ago that I would be loyal to this human being. She showed me more in the first two days that I met her than many shyer or meeker souls tend to show in a week, a month or a year (this, coming from someone who was himself a much shyer and meeker soul in the past).

Beyond her fun style and yoga prowess, she carried a gusto about her that was kind, unapologetic and steadfast.

And I felt loyal to her for that.

A week and a half ago, this story of “how I got hooked on yoga” came full circle.

Not only did I graduate under the tutelage of Debbie after six months of yoga teacher training to become a 200-Hour Certified Yoga Teacher, it was none other than Debbie who invited me to join the staff of my favorite local yoga studio, Laughing Elephant Yoga, in my old hometown of East Greenwich, Rhode Island.

And I start teaching tomorrow!

None of us ought to go around doing kind things and expecting that it might come around in a blog post three years later. It’s not about recognition, payoff, or even knowing that an ounce of kindness you shared with someone really did change that someone’s life.

And, in yoga and other healing arts, teachers and leaders are wary to accept praise like this because they’re humble and good people who understand that they are simply guides of students’ own practices. People in positions of power and authority always run the risk of being given credit for a student’s breakthroughs, changes and evolutions when, really, it was the student’s own doing, all along.

But when you carry indiscriminate kindness in your heart and make a practice to stand up for someone, speak up for someone, offer a compliment, give an “I’m here for you” or even chase someone out of the yoga studio and onto the street, you can damn well trust that that showing of love may have a real and lasting effect on the life of the one who receives it.

I’m eternally grateful that Debbie showed me an ounce of her warmth, consideration and kindness nearly three years ago.

It’s ironic how something like a simple and even forgettable moment–a generous but “everyday” act of kindness–can have such a ripple effect in your life. It’s almost unnerving. But it’s also kind of miraculous, and beautiful.

It’s moments like these when you do feel that something bigger in our Universe has got your back, if you dance the dance with Her to receive it.

I’m proud that it was a new friend’s insistence and my “rolling over” to accept it that put me on a path that I never intended to walk–and how much better a man I am for it.

So, thank you, Debbie.

You’re a pretty amazing human being and I’m so grateful to call you a friend.

And, I know that there are dozens more stories like this in our hometown community here in Rhode Island that give you the same thanks for being so kind, for teaching so generously, and for making the space in the room for everyone who walks in. 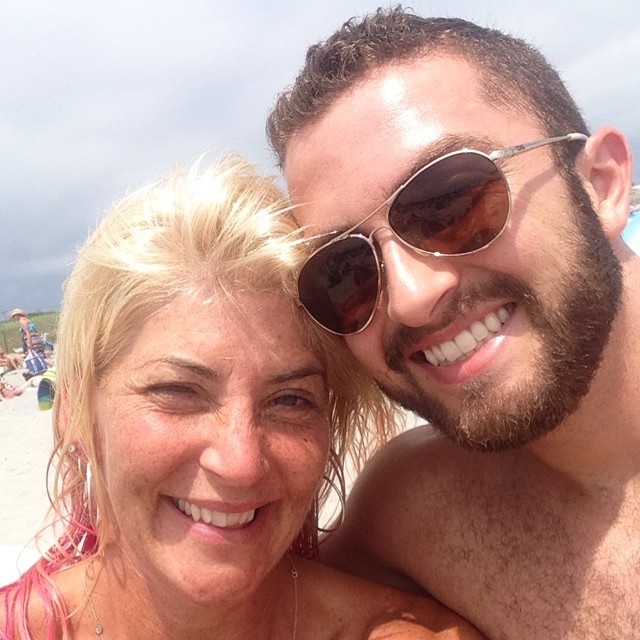 To you, the reader, I encourage you to spend some time this week reflecting on acts of kindness and generosity that might have put you on a path that you never intended to walk.

I think that it’s important to remember these stories, because they are earnest examples that can really help to motivate our own actions, words and deeds on any given day.

Be abundantly kind and considerate, and forget the result. The Bhagavad Gita says, “Abandon all attachment to the results of action and attain supreme peace.” Make space for people. Hold space for them–whether through listening, understanding, compassion, empathy, a smile or shuffling a few yoga mats around in the studio.

Who knows. Maybe someday you will be someone else’s pink haired yoga teacher who, through simple caring and an extra ounce of effort, helped change the life of a guy who thought it easier to pack his mat and walk away.

P.S. — If you’re in the Southern New England area, I invite you to come join my yoga classes on Tuesdays at 12:15 PM this summer (beginning on July 15). As I begin to cut my teeth as a newly certified yoga instructor, I promise to make the space for you and would truly love to guide you through a movement-based experience of the self.