It’s a good night for dreaming when I wake up having saved six or seven butterflies from certain death.

In the dream, there were unfamiliar people in an unfamiliar room. A large grasshopper sprawled out of hiding and sent a fright to those nearby. A woman, who seemed to be in charge of the room, instinctively tried to slay the bug. “It’s good luck to let it go,” I offered, suggesting a reward for setting it free.

The unfamiliar room then became my childhood home’s kitchen. Everyone else disappeared. I opened the kitchen door — an outlet to the patio, where the critter could escape — and stood outside to coax him out.

A butterfly flew towards me as I waited. I picked him up and felt his shaking, and placed him on my right arm. As if it had noticed, the grasshopper came towards me and the door. But then he became a colorful butterfly himself, wide and antenna-y. He walked across the kitchen floor, towards the door, towards me, and took flight. He landed on my left arm and there he rested, and I could feel his shaking.

A journal appeared in my hands. It too was covered in butterflies.

I can still feel a butterfly on each arm where in the dream they had clung.

Now awake, I reach towards my nightstand for my phone. I check the time. It is 3:28 AM. And behind the time on the phone’s lock screen is a photo:

My right index finger, and a broad, green-yellow butterfly standing upon it.

On my first day in India, a boy taught me how to save butterflies.

It was October 2014, just hours after my long and somewhat embarrassing welcome to life in this foreign world (which I chronicled here). In a foggy, exhausted haze, I was quietly walking about the hotel grounds that this boy, his family and I were sharing as guests. 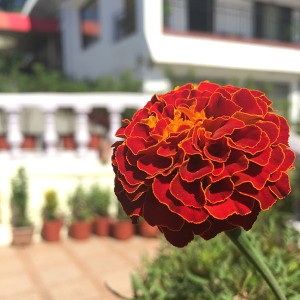 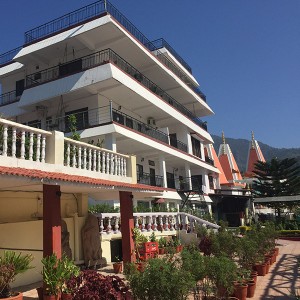 He was about 11 or 12 years old, dark haired, chubby. He stood tall for his age and moved about proudly, as if knowing he was already a man — many young boys seem to in this region of India.

The small hotel we share overlooks the majestic Ganga river, one of the holiest waterways in all of India. The hotel rooms themselves are carved directly into a dropping cliff face, giving each a spectacular view. But the top floor of the hotel is thus ground level. And a sprawling, open, tiled deck connects the entryway of the property to the hotel lobby and to a glass atrium, neighboring the cliff drop, which shields the lower levels’ stairs and elevator.

I came to know the deck’s glass atrium as a place where butterflies needed saving.

Its glass walls are like air, blending seamlessly into the surrounding landscapes of mountain, hillside and river valley below. It is here that countless butterflies, moths and even the occasional dragonfly flutter into, and struggle to escape.

I can’t say for sure what prompted me to shoo that first butterfly towards safety in my first hours in India.

It may well have been guilt — saving the butterfly, an attempt to make good on the hard-headed manner by which I had arrived.

Whatever my motivation, I stood in that glass atrium and attempted as best I could to lightly cup and trap the frenetic butterfly. But I was failing loudly. The young boy saw. He and his parents were walking about the deck, observing the view of Ma Ganga and taking family photos from here and there. 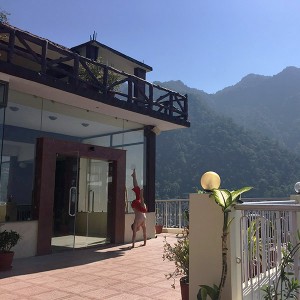 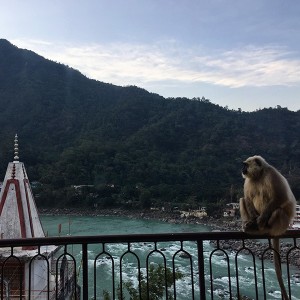 With a child’s instinct, the boy saw me trying something noble and without pause gave lend to my failing efforts.

He didn’t speak English and we didn’t exchange a word, and yet we had our very own conversation.

My form was all wrong.

Creating a cage with my fingers was not the manner by which to rescue captive butterflies. The best manner was to extend one finger in their direction, he gestured, as if to create a perch. And then, you wait. “They will come,” he seemed to say, standing stoic, motionless, patient.

But as a few minutes passed, the butterfly refused our perch offerings.

It turns out that for stubborn butterflies, some light force is more effective.

It’s a last resort, but sometimes a heavy hand is necessary — especially when it comes to saving proud butterflies. 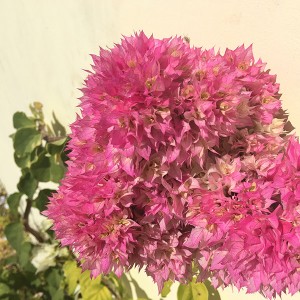 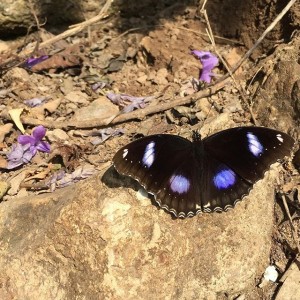 When the butterflies take rest from their flutter against the windows, and when their wings close, you can quickly snap them together with a light-firm pinch of index finger and thumb. Your timing must be perfect and your touch, while strong, must not be harming. If you do it right, you shouldn’t feel much struggle — their wings have nowhere to go. Then, you can walk them outside yourself and place them on a flower, leaf, or the breeze itself.

The boy snaps his small fingers and holds the stubborn butterfly lightly. He walks out the glass doors of the atrium, releases his fingers and the butterfly goes free.

I am all smiles, and though the boy is proud, he seems to think nothing of his deed, and returns to his family, and I, to my day.

In a place like India, what you learn first is what the senses find so confronting.

The heat, the crowds of people, the smells of burning garbage, vivid colors, cow dung smeared across streets, the incessant flies battering your skin, feeling hundreds of curious eyes upon you, and the car (and bike) horns — by God, the horns.

But what’s so easy to miss in a place like this is what the gross senses, so overwhelmed, cannot sense on their own.

Like the underlying spirit of the land and the people. 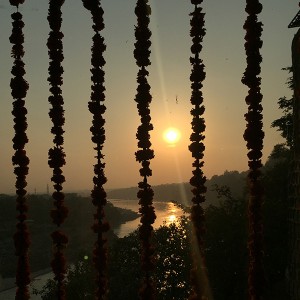 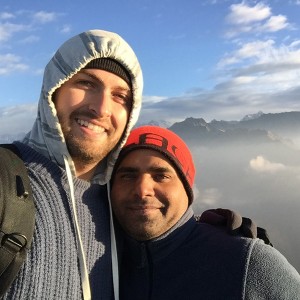 Like how young boys of 11 or 12 years grow up faster here than they do at home. How, for the incomprehensible poverty, somehow a deep, underlying sense of contentment reigns wherever you go. And, of course, the reverence for all living creatures, whether cow, cobra or butterfly.

Here, it’s not strange for a man to spend minutes of his life trying to rescue a trapped butterfly.

Here, in India, a young boy of another world teaches the foreign man how to save it.

Many say that India is a land of polar opposites and extremes, and it is.

There is wealth neighboring poverty; reverence for animals contrasted by stray dogs and holy cows eating garbage in the streets. This is what outsiders are quick to think of as “the only India” that exists: an India that is polluted, has issues, struggles and hypocrisies — but, hell, every nation does.

Every culture does. Every people group does.

It’s easier to finger-wag other peoples’ problems than it is to even admit our own. When you’re too close to your issues, your baggage, your hypocrisy, you tend to get really good at justifying it — with language, with story, with excuses and “This is just how it’s always been.”

(We all ought to be able to admit this to ourselves.) 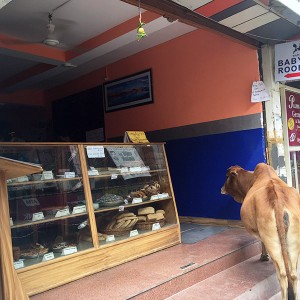 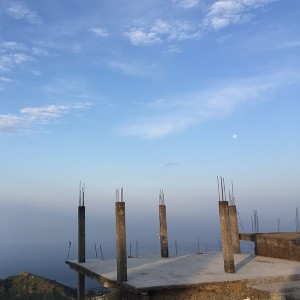 And, if you go to certain places in India and simply rely on your five senses — look around, breathe, or try to keep a pair of shoes shit-free — you’re probably going to hate it. Resent it. And, doubt why anyone would go at all — let alone, why anyone would go back.

That’s what’s so tough to explain about a curious place like India.

Before I first visited, people asked me, “Why?”

After I got home they asked, “Would you go back?”

When I planned to go again, they said, “Really?” 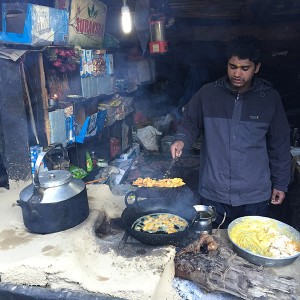 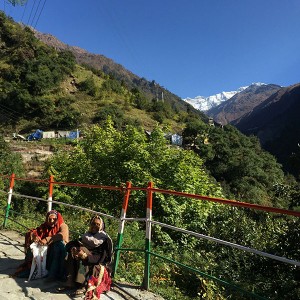 I suppose I could answer all three questions at once:

It’s because this is a place where a boy teaches a man how to rescue a butterfly from its death.

It’s a place where motorcycle-riding 20-somethings stop for elderly hitchhikers alongside an isolated mountain road — and give them a ride wherever they’re going. India is a place where the word “stranger” doesn’t seem to exist: in each town, cafe or restaurant, people talk to one another as if they’re related.

When a bus can’t make a wide turn, everyone gets out of their cars to help direct it. In India, when a shadowy-line turns out to be a baby cobra gliding up some steps in town, a man shouts and follows it, alerting everyone nearby, and then he keeps following it to make sure no one gets bitten.

When a young man is seen walking with a limp, a Nepalese Sherpa ties his sweatshirt around his knee and into a makeshift bandage. 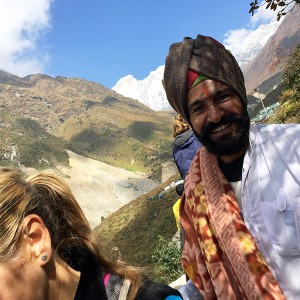 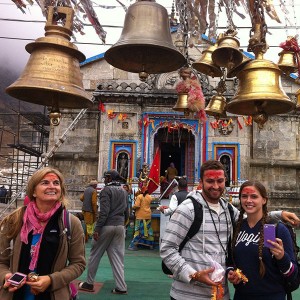 In India, non-Hindus are welcomed onto pilgrimage sites and given blessings — not for their dogma, but for their souls.

I went back to India for subtle India — the life, the culture, the spirituality and the community that pervades life here.

Subtle India thrives behind the “surface level stuff” that an outsider’s senses find so confronting, so overwhelming — the hypocrisies and issues

There is a heart to India that the senses alone can’t comprehend.

Anyone who’s been to India and who longs for it again will tell you, it’s this subtle side of India that spites the chaos. Subtle India is why they yearn to return.

It’s why first-time visitors, by the droves, become spiritual soldiers to India — in only a week, ten days, two weeks of living there.

If you can’t quite grasp why, perhaps you should go for yourself.

Who knows what you might learn while you’re there. 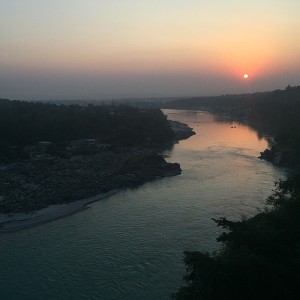 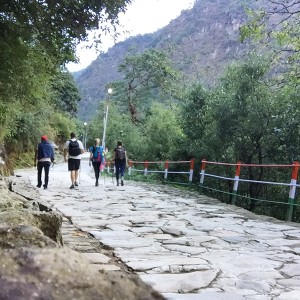 When I went back to India in 2015, I resumed my duties of saving butterflies — especially from that glass atrium.

I had two techniques in my arsenal: the perch, and the pinch. But this year, I began to try another technique: the plea.

Since the young boy taught me how to save butterflies, I’ve started talking to them, too.

I’m still not sure if they hear me. But to my surprise, they seem to listen.

As I draw near to the trapped soul, I extend my finger in its direction. Then, I tell it, “You have to trust me.”

It might take a few moments of convincing, because different butterflies have different attitudes. In fact, all flying critters do. Moths can be reckless, but deep down, they’re trusting. Butterflies are proud and stubborn — they won’t give in until they have to. Dragonflies? I won’t even get into dragonflies.

But there was one butterfly in particular who listened to my plea, and listened well.

He was a broad, green-yellow butterfly who wouldn’t stop shaking. 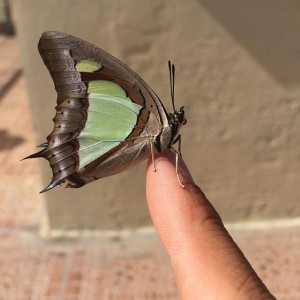 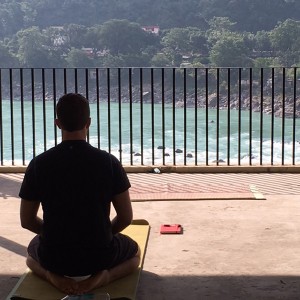 He resigned his pride and finally crept onto my finger, hanging on as I left the atrium, stood into the breeze, and walked about the sun-drenched deck. He seemed to like his perch, so he stayed there. Eventually, he stopped shaking, and took a good look around. He wiggled his antennae and poked his nose about, inspecting this perch. I showed him off to a few friends who happened to be passing by. I took out my phone and snapped a few pictures so I could remember him.

To whomever sees his photo on the background of my phone’s lock screen, I joke, “My pet butterfly.”

I began this story wanting to explain why I went back to India — especially after the manner by which I had arrived. The truth is, I love India — for all that it is. It is a teacher, a challenge, a friend. I believe that India and the West will become close, reverent friends in the century ahead — our peoples have much to give to one another, and much to learn from each other.

“Why I went back to India.” Indeed.

Perhaps, when the next person asks me about this place, or what it’s like, or why I would ever go back there, I’ll just tell them:

“Because it’s where I was taught to save butterflies.”