Havana is Cuba (A Photo-Essay)

Havana is Cuba (A Photo-Essay)

Already, I am lonely. Already, I am homesick. I know this Me; the one I hope to never show, the childlike Me whom I confront in every adventure.

Why I go is to resurrect him.

Every time, I slay him.

An hour into Havana, I am emotionally distanced by the local tongue. A linguist, a writer — a lover of what language I know and call “my own” — here I am incapable. Already fearing there will be so few to talk to, suddenly, I am crushed by my aloneness. I am meager and small. I cannot be known.

In this moment, I wish I had spoken the language all my life.

Loneliness is a condition of the heart. But feelings are not invisible forces. They are the forming energies that move matter. And when loneliness is felt, it is soon activated in the mind. Then, loneliness ensnares every thought. Ideas, dreams, desires, they are bold black bears in the endless wild named Potential.

But, when lonely, our thoughts are dragged by the hunter’s claw; our intentions, they moan; our dreams, they limp.

Loneliness is a disease; it is unnatural. It is also a myth, a lie, an illusion. But as it is felt, so it is thought; and so it is thought, so it becomes real. Loneliness is a guiltless murderer. It speaks within the body; it speaks through the body. When we feel it, our loneliness is put on display. Loneliness shows in the face; it speaks a desperate language. See me. Know me. Hold me. I’ve worn it often and in many places; when it comes, I know I must stand to fight it.

Here I am in Cuba, and here for the next 10 days I shall remain.

I could hide in my bed. Quit. Go home.

I tumble by the dilapidated facades and crumbling streets of Old Havana. I feel wandering eyes upon my outsider’s skin with every pace. There is no greater sin than to caste presumption upon a soul for the encasing it cannot escape. It is a crime of ignorance. It stabs brothersisterhood; it slices the eyes of Wonderment.

But the steps are invigorating. Each one is faith. Every pace is confidence.

I am the metronome: my stride is my determined song. 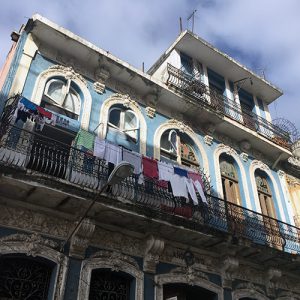 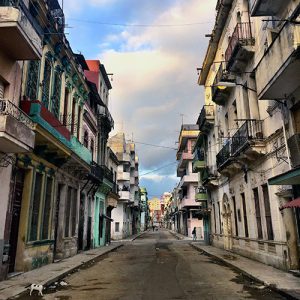 Romantic emblems of Americana of old like Chevrolets and Buicks glitter with the wholehearted affection of their owners. Gold-mustard, white crown on turquoise, platinum-lavender, their colors are emphatic, unique, unfamiliar.

Street speech competes against their hums and grumbles; your very thoughts are lost in proud noise.

Heavy fumes assault every breath; the black taste lingers on the tongue. Police are frequent in the city, coupled on street corners or walking in short patrols. An American in Cuba, I’m half assured by the guardians of justice; I’m half reluctant to be seen even for seconds by the eyes of a national authority not my own. 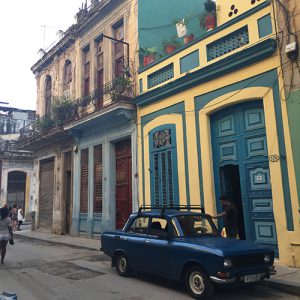 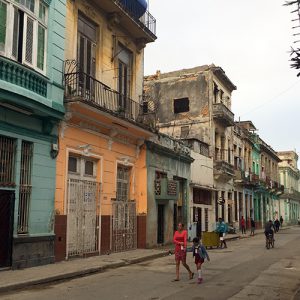 The first person with whom I speak in Havana is David.

He catches my eye outside of his sandwich shop. David is Afro-Cuban, bald and lean. For his age, maybe forty-five years, he has far too few teeth. A navy blue apron is tied over a white tee-shirt. He speaks little English, but is generous enough to give his second language a thorough try. 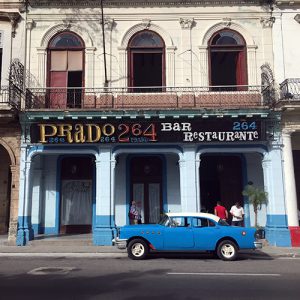 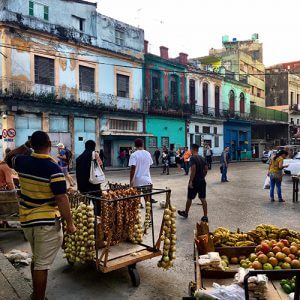 “Dabíd,” I press my best attempt at a Spanish accent.

“Ah,” I grasp at the nearest sign of unloneliness, “We are brothers!” 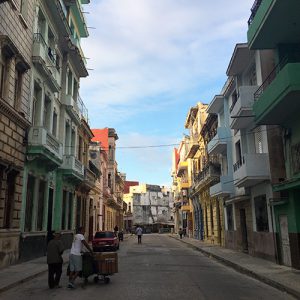 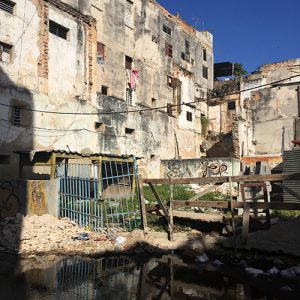 “The U.S.?” He tilts his head, pouts his low lip over his upper teeth (the few), takes my hand and shakes it. These gestures as if to say in a language I can comprehend,

David tucks away into the swinging door which leads to the kitchen. His restaurant looks thus. There are three park style tables, the unforgiving kind whose chairs are attached by iron. The room is vacant plaster walls lit by two hard spots of white light. Flies abound. Two young men sit and speak lively in the table by the door, drinking cervezas from short glass tumblers. 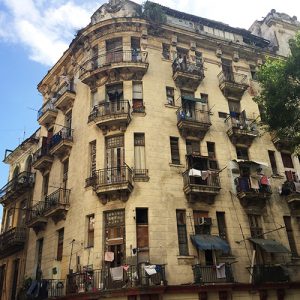 To the right of the entryway is a broken door, once affixed, now leaning against the inside wall. A young man is just beyond the broken door and sitting in a window which overlooks the street. Like a To Go window, he is ready to receive orders, though I see no one come. The street-side sign beside him, Offertas, or offers, is sparse.

When I had come inside, David shooed away a rounder woman who was sitting in what was to become my seat. 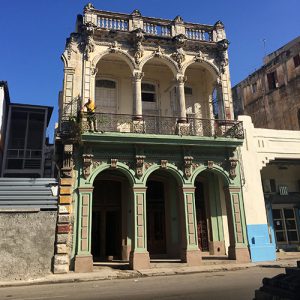 I am instantly bundled with guilt.

To assuage my intrusion, I infer that their relationship is familial, or nearly so, since she seemed neither gracious nor chuffed to concede the seat, as if this has happened before.

The bar is on the far side of the room.

There is one tap, and one bartender, and a flimsy shelf upon which dark glass bottles are evenly spaced — I count six of them. Decor is a plastic Christmas stocking, and tinsel. 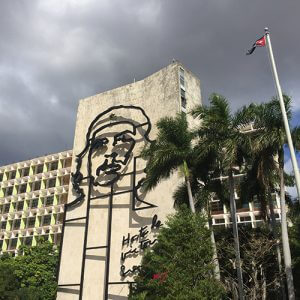 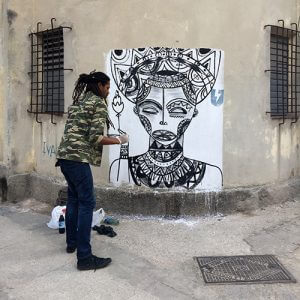 I watch the bartender pour from the tap into a white plastic bucket. From it, he distributes the beer into small glasses. The beer is cold and crisp. It carries a hearty alcohol content, so my empty stomach is quick to process and inform me.

He brings on a flat white plate one simple Cuban sandwich: chunks of fresh thick-cut ham, which I usually prefer not to eat, neighboring layers of a feta-like cheese and lettuce tucked into a palm sized puffy roll.

Towards the end of the short-lived sandwich, David sits across from me, seemingly out of obligation.

I take it as a gesture of hospitality.

David slumps forward in his chair. He interlaces his fingers gentlemanly, and cocks his head to the side, looking down, around, making eye contact and then breaking. We try to converse. About what city I’m from. If it’s cold there. About where he’s from. If he likes it here. About what I do (“escritor y profesor de yoga,” or, writer and yoga teacher). 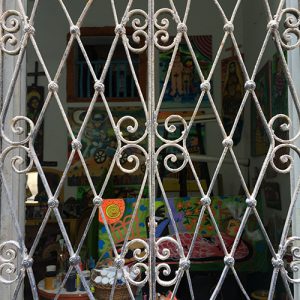 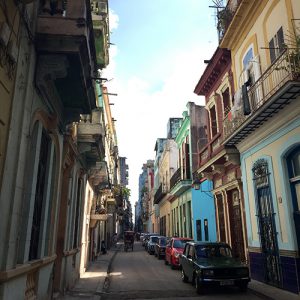 “Where you go, from Habana?” he inquires about my itinerary.

“Ah!” David lights up. Viñales is a town three hours south by southeast; a mountainous and remote destination, replete with towering mountains and rich farmlands. “Viñales est…” he makes an Okay sign with his thumb and index finger, squinting eyes and lips like an enthused wine connoisseur.

“Sí!” I agree with him, though not based on much knowledge of Viñales. I’m just excited to understand him.

“Habana est muoy bien,” I offer to David, as if to say,

Of course, from what I’ve seen, it’s really nice here too, though. 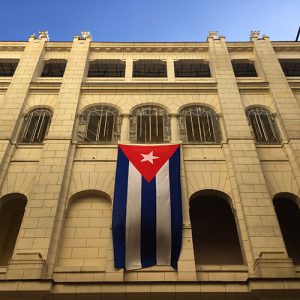 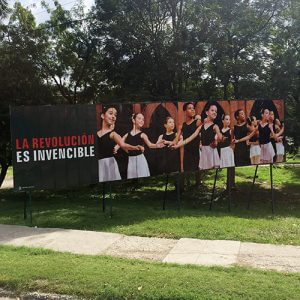 “Habana,” he trails off, raspberries his lips, rolls his eyes.

It’s not the response I was expecting, especially in a dialogue so rudimentary: so necessarily simple, so vitally short and polite. Disagreement, even when impersonal, breeds more-ness. Not necessarily more of itself, but certainly more of something. More words, firstly. More effort, next.

Part of why we share socially-polite, predictable, boring exchanges in the day-to-day of life (as I’ve written about here and here) is because the conversation is frictionless. It requires no added responsibilities. It demands no more-ness. It lives a breath, flits in the air, and dies.

True dialogue is a relationship. A commitment to the Other.

There is vulnerability, compounded by a necessary curiosity: you must will and desire for understanding in conversation. Understanding does not happen upon itself. Without two equal and invested contributors, exchanging roles of Giver and Receiver, there is only noise.

Even in broken Spanish-English. 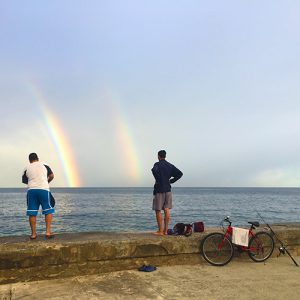 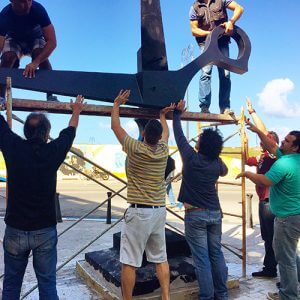 I am perplexed by David’s dismissal of his home.

Of his city, this place in which I’ve just arrived, within which his sandwich shop — that I, a foreign tourist, now patronize — resides.

“Por qué, tú es,” I try to ask David, Why are you, then tap both index fingers down onto the table, “…aquí, here, en Habana?”

This is the center of his world. There is no other place to call home.

P.S. – Here’s an extra treat for you. Listen to the organic sounds of Havana by night in this audio recording, as I walk through the streets of Old Havana on the last evening of my visit to the capital city:

P.P.S. – If you enjoy the mobile photos I snapped of my impressions of Havana, Cuba, follow me @DaveUrsillo on Instagram. It’s the only social media I really use these days, and I love sharing snapshots and visual insights of everyday life and my travels.