Venting your anger, frustration, and emotions online on Twitter, Facebook or a blog is no different than venting on a public sidewalk; the entire world sees it.
February 8, 2010

Many men and women are quick to exploit the accessible, often anonymous nature of blogging and online social networks like Facebook and Twitter to quickly and easily vent emotions like anger and frustration in life.

Allowing one’s self to “vent,” or express natural human emotions like frustration and anger, is not necessarily problematic especially when we witness the consequence of an individual bottling up those emotions over a long duration: like magma, one’s anger can boil an enormous amount of pressure within the individual, only to erupt upon a sudden in a fit of physical or emotional rage.

Indeed, to suppress natural emotions like frustration is a dangerous alternative to the seemingly harmless nature of venting. However, venting online, as on a blog or through Twitter or Facebook, is hardly equivalent to screaming into a pillow. Venting online is more like venting on a public sidewalk, for all to hear and remember.

There it is: you’ve had enough. Someone or something has triggered rage, frustration, and disgust within you. It may be a rumor you overheard, the consequence of a longstanding disagreement, a conflict at work, or a comment made in jest or with outright, hurtful intentions. Worse, the more you think about it, the stronger this anger grows within you. You get angrier and angrier. As if without choice, you decide that you must vent this mounting frustration, somehow.

Rather than burden a family member or launch into a tirade that might forever turn away a lover or friend, you resort to the Internet. Whether it be updating a Facebook status, shooting off a short-but-sharp 160-character Tweet, or writing an extensive blog post that rivals the opinions of a Supreme Court Justice, you sit at the computer and begin to furiously type away. So, what’s the big deal?

When we were young, we’d often hear teachers and parents recommend that in such fits of rage one should scream into a pillow in order to diffuse the anger boiling within them. Another option is to write a strongly-worded letter. Addressed to the individual or group that has upset you so wholeheartedly, you subsequently place it in a desk drawer for several days, only to reread it again at a later date. With this strategy, once you have expressed your anger in written form and allow enough time to pass so that you may regain a level head, you will feel less inclined to send the letter but also feel less upset at the situation.

Truly, expressing one’s anger and frustrations is best done in private for it is a healthy alternative to bottling up emotion and can prevent heavy regrets.

Venting online is hardly the equivalent to screaming into a pillow. A more precise equivalent is standing on the sidewalk and shouting obscenities at the passers-by: venting online is really no different from venting in public. Whether on a blog, Twitter or Facebook, venting online puts your face and name to your frustration, anger, and outrage. Even a rash, heat-of-the-moment explosion of emotion is something the entire world can not only see, but that the Internet can permanently retain and always remember.

Even anonymously, choosing to vent online is choosing to project negativity into a public realm. Consider the array of men and women (and even children) that could read your words and take them to heart. Negativity perpetuates negativity. Unless you wish to cause negativity in others — even if they are strangers whom you will never meet or encounter in “real life” — and desire negativity to be brought unto you, you should be remiss to willfully engage in the folly of venting in public.

Venting online may serve its purpose in helping you relieve your anger — but it comes at the expense of what the readers of your blog and those in social networking circles think of you. Perhaps your readers will be sympathetic and considerate to your emotions. More likely than not, they will deduce that your fit of anger is not just simple venting, but indicative of your immaturity.

The Consequences Can Be Real 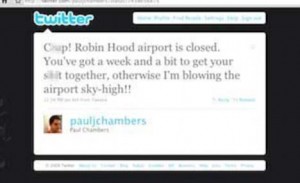 Just last January, a 26-year-old Briton wrote on Twitter that if a local airport did not start open soon, that he would “blow the airport sky-high.”

More than a poor choice of words, the British man’s single, solitary instance of venting online was enough to spark a visit from British police and national security officials who arrested him under the UK’s Terrorism Act. The tweet was enough to cause concern of a bomb threat, and in a post-9/11 world, such threats are not taken likely.

As if the man’s “bomb hoax” was not enough, his name has garnered international attention; what was a rash, albeit dumb, instance of venting in public is now certain to cause an array of subsequent unpleasantries and difficulties in the future.

How to Vent Online Safely and Constructively

Venting can indeed be carried out safely and constructively on the Internet. But, before venting one should consider how the words they write would be received if they were shouted from a public sidewalk. Venting online is best when it takes the form of introspective dialogue, wherein the “venter” explores the origins and motivations of his or her frustrations and questions his or her reaction.

Instead of harping on the trivial details and catering to your individual senses of pride and ego, inject humility and the admission that you may be at least partly, if not wholly, responsible for the anger or frustration you are feeling. Choosing to make such an admission is a sign to readers and social networking circles that you are humble, mature, and introspective — qualities that are much more constructive and inviting than their emotional counterparts.

When you turn venting into an exploration of your anger’s causes and effects, you evolve what could have been a simple, rash expression of your frustration into a lesson that you have learned from the experience. Even better, others may positively benefit by reading it and taking the lessons you have learned to heart. When frustration, anger and other undesirable emotions grip the mind, one would be remiss to rashly choose to vent online, for it is really no different than venting in public.