The Journal I Never Kept: The Interview

In spite of the dirty and deceitful game of politics, some people are so damn good on the inside that they shine on in your memories for as long as you live.
May 6, 2010

The Journal I Never Kept: The Interview

“The Journal I Never Kept” is a new column feature on DaveUrsillo.com that details true stories from my past in a storytelling style, as if from a journal of only memory. I hope you enjoy them.

There I sat, alone on a green leather-bound chair in the corner of a small waiting area in the Lower West Wing of the White House. Outside, the heat and humidity were as characteristically oppressive as can be in July in Washington, D.C.

In between my long, awestruck stares at photographs on the walls of then-President George W. Bush alongside foreign dignitaries and other political movers and shakers, I smiled nervously at passersby, none of whom I recognized but all of whom, I was sure, had greater stature and status than indicated by their simple, professional dress.

In the field of politics, wherein appearance is everything, exuding confidence is one of your greatest benefactors; even when you’re a lowly, 22-year-old unpaid intern. But exhibiting that desired, stone-cold demeanor is hardly as easy as it sounds when you’re just steps outside of the Oval Office and attempting to prepare physically, mentally and emotionally to interview for a vacant position in the Office of the Staff Secretary — especially when it was requested just forty minutes prior. 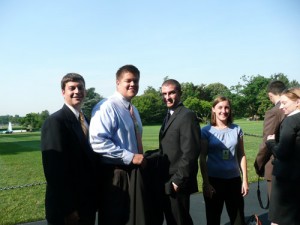 Those Were the District Days

By late July, I had spent two full months as an intern at the White House Council on Environmental Quality (CEQ). Those District days in the summer of 2008 were blisteringly hot in the nation’s capital, and they must have felt even hotter to the few remaining loyalists of the President’s as his much criticized, eight-year tenure began to draw to an end.

The Administration’s conclusion was certainly in sight, but it had more legs than the few weeks remaining on my internship. As I tried to get a sense for what jobs would be available at summer’s end, a fellow Holy Cross alum emailed me to ask of my interest in a coming vacancy in her office, the Office of the Staff Secretary. Of course I would be interested, I told her.

A couple of weeks passed without any news of the job vacancy or interview. Then, one Wednesday afternoon at around three o’clock I received a phone call on our office hard line. It was a younger guy from Staff Sec, whose name I want to say was Jeremy. “We would love to have you come in for an interview this afternoon,” he told me. Awesome, I thought to myself, what time? “We have an opening in our schedule in about 40 minutes,” Jeremy said. 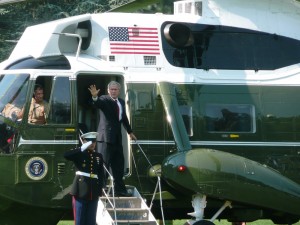 No Time to Spare…

I immediately began to hope that the lack of time to prepare for the interview would mean a lack of time to worry about it, too. Not the case. Less than an hour later, I sat quietly in that side room in the Lower West Wing attempting to exude some form of confidence in front of the passersby, but coming up noticeably short.

Minutes passed before Jeremy, who had called me only forty minutes prior, greeted me and invited me in. The younger members of Staff Sec hosted me for a short, preliminary group interview, during which I felt more like a contestant for a reality show than a candidate for a job. Questions came from every corner of the room and without logical progression. After each answer, the inquisitors would give awkwardly long, silent glances to each other one by one, as if communicating in a way that I wasn’t aware existed.

One of their questions was, “What do you do for fun?” I paused for a moment, trying to remember what exactly I enjoyed doing in that foreign city, devoid of my family and closest friends. “Well,” I replied, “I really like baseball… the Red Sox.” Another awkward pause and series of glances around the room had me wondering what the issue was, exactly. The informal interview rolled on, but the real interview, I was told, was coming with the Staff Secretary himself, Raul Yanes.

“How do you feel about Manny?” 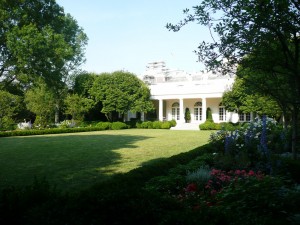 Raul looked like a younger man than you might expect as a Presidential Appointee charged with filtering and managing all communications and documents intended for the President of the United States. He appeared to be in his late 40’s, had dark hair, and a warm and inviting presence about him. As we sat in his office, one floor below that of the Vice President, Staff Secretary Yanes began to run his eyes over my resume and ask typical interview questions. I responded with typical interview answers.

Then, Raul posed a unique question that wasn’t inspired by that one-page synopsis of my life, work experiences and academic accomplishments. “How do you feel about Manny?” he asked bluntly.

In the summer of 2008, Manny Ramirez, the popular left fielder for the Boston Red Sox, was rumored to be on the trading block after another year full of off-field and on-field incidents spurred the Boston baseball team to shop the All-Star slugger to others around the league. The question caught me off guard; but with a nervous smile, I concluded that Raul could have only been told of my baseball affiliation for one reason: he must have been a Yankees fan.

“You can have him,” I jokingly quipped, sending Raul into laughter. Manny would be a free agent in the off season, and the baseball world was abuzz as to whether the New York Yankees would sign the slugger to a mega contract. Raul and I began to discuss baseball, the season to date and trade rumors in depth, abandoning the usual tension and “fakeness” of job interviews. It was a genuinely fun experience, and one that alleviated the stress and worry that had built within me in that span of 40 minutes.

The series of interviews at Staff Sec concluded a full two hours after they began. I was relieved, though exhausted, and confident of my chances at getting the job. The next couple of weeks passed by quickly. The trade deadline in Major League Baseball had come to pass as well, and Manny Ramirez was no longer a member of the Boston Red Sox. I received a phone call late one afternoon. It was Staff Sec. Jeremy told me that while I was one of two finalists for the job, he regretted to inform me that they offered the job to another candidate.

“No offense but, if you didn’t get the job…” 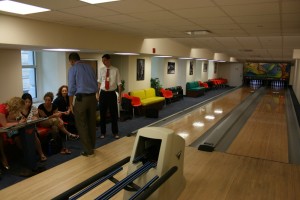 There is something truly special about connecting with someone on a personal level in the field of politics, maybe because it seems to happen so rarely. Politics is like business, but the business is people. And there’s something naturally unsettling when real people are treated only like figures, tools and profit.

But when a guy like Raul Yanes — an important man with status who had every reason in the world to be stressed beyond comprehension, tense beyond belief, and frankly, a total asshole just because he could — shatters that mold, it’s something you never forget, especially when you’re just a 22-year-old unpaid intern. People like Raul become a testament to the goodness of humanity, those rare gems in the crowds who, in spite of the dirty and deceitful game of politics, are so damn good on the inside that they shine on in your memories for as long as you live.

Weeks later, my internship at the White House would end. As luck would have it, I began to apply for jobs in early autumn as the national economy began to implode. One interview I managed to obtain was at a firm in Virginia that specialized in writing proposals for federal funding and grants. I sat at a round table surrounded by similarly-aged employees, who, like Raul, scoured quickly across my resume and began to ask me questions.

One young man noticed that in my list of recent accomplishments I had written, “Interviewed for position at Office of the Staff Secretary in the West Wing of the White House.” Puzzled, he paused before asking, “No offense… but, if you didn’t get the job… why would you list it as an accomplishment?” A million thoughts and memories, much like the ones detailed here, rushed through my head. With a slight smile I looked up to the young man and thought to myself, How much time do you have?