The Myth of Global Governance

Free peoples would fear international conspiracy of heavy-handed measures to curtain global warming, if the prospect for global governance weren't a myth.
January 21, 2010

The Myth of Global Governance

“Wake unto the day.
The gaze of Thou shakes Black haze.
Rise again in the Age of Green, wherein we struggle to see life as anything but  varying shades of color.

The skies pierce in powdery Blue. Cloud floats in Grays and Whites as if from billowing stacks and children look in wonder of what cities were like.

Once-free men decry the woeful Yellow sun that shines brightly only to more clearly reveal the Brown mud and murk of the ever-empowered Elected, the ones who have betrayed us.

Oh, we have survived. But devoid of the White light of freedom, when minds are engulfed in such horrid Blackness, we oft ponder Life’s worth…”

The resounding failure to reach an international agreement that might help curtail anthropogenic global warming at the Copenhagen Climate Change Conference of 2009 stirred some rallying cries from Britain to Canada for the creation of new world order that, theoretically, would prevent future diplomatic clashes between nations and allow a better process of dialogue on vital international issues. For example, British Prime Minister Gordon Brown boldly proclaimed:

“Never again should we face the deadlock that threatened to pull down those talks. Never again should we let a global deal to move towards a greener future be held to ransom by only a handful of countries. One of the frustrations for me was the lack of a global body with the sole responsibility for environmental stewardship.”

As vital as the preservation of the global ecosystem is to humanity and to future generations, free men and women should find it both sinister and dangerous that governments worldwide may be willing to collectively conspire to take heavy-handed measures to curtain the ever-controversial issue of anthropogenic global warming. Or, they should, if the feasibility of global governance weren’t an utter myth.

Origins of the European Union

Earlier this week, I published a historical essay entitled, “Origins of the European Union” that investigates the motivations of the international agreements between European states after World War II and that eventually led to the creation of the modern European Union.

Through the lens of political science study of International Relations, my findings indicate that international unions of sovereign nations, like the European Union and its precursor organizations, are only likely to unite when nations involved find individual self-interest as the primary motivation to join the union. Further, nations’ self-interest tends to be primarily motivated by national security and self-preservation. Ironically, though, states’ refusal to sacrifice their individual sovereignty is also the major hindrance to further international integration within organizations like the European Union:

“While security was the causal factor of early European Union, it has also hindered further attempts at European Integration. Numerous attempts to develop a common defense and foreign policy have failed because states refuse to relinquish their individual, sovereign rights that allow them to determine their own security policies.”

But, an important question remains. Could global warming be considered enough for a national security issue for countries across the globe to lead to the creation of a new world order?

The Telegraph’s Janet Daley astutely draws connections between Gordon Brown’s rather desperate, “don’t-blame-me” suggestion for a new world order and a rash of criticisms with the European Union, both at its founding and today:

“…would [the new world government] have powers of policing and enforcement that would supersede the authority of elected national governments? In effect, this was the infamous “democratic deficit” of the European Union elevated on to a planetary scale. And if the EU model is anything to go by, then the agencies of global authority will involve vast tracts of power being handed to unelected officials. Forget the relatively petty irritations of Euro‑bureaucracy: welcome to the era of Earth-bureaucracy, when there will be literally nowhere to run.”

As the origins of the European Union indicate, even when countries’ national security is an utmost priority (as when upon the heels of two world wars and a plausible third) states still refuse to sacrifice their sovereign right to control law and order within their borders, and especially when it comes to self-determining foreign policy. 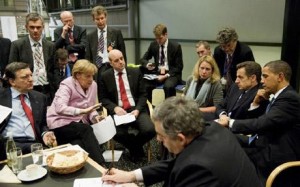 Is Global Warming Enough of a Security Concern?

Even with the distinctively “global” problem of anthropogenic global warming, the premise of self-interest as the determining factor in international cooperation remains: Developing nations such as China and India will wholly refuse to curtail greenhouse gas emissions and environmental pollution at the expense of their sovereign right to industrially develop and modernize — especially when it is hypocritically beckoned by Western, post-industrial nations who are not only modernized but solely caused the very environmental issues they are looking for the entire world to take responsibility for, and ultimately solve.

Even in the wake of the failed Copenhagen Climate Change Summit, the myth of global governance ends with the realization that a new world order would never be voluntarily given member-states’ sovereign rights — even if humanity’s very survival is on the line.