How to Cultivate Compassion in Every Human Interaction

Embodying compassion can reap radical goodness and happiness for others and ourselves, if we're brave enough to face it and fight the cynical urge to run away.
July 16, 2010

How to Cultivate Compassion in Every Human Interaction

“What if we strive to cultivate genuine meaning in every human interaction?”

No sooner than my asking the question above on Twitter did a complete stranger, perhaps in his mid-forties, walk past me and begin to speak.

“No complaints,” I replied in agreement.

Book in lap, I found myself on a park bench that morning, overlooking a small public beach. On some days, usually in the early mornings, I like to seek out places of solitude to read or just be in the quiet. Doing so helps me when I’m lacking direction or motivation, if my focus is in need of adjustment or I feel the need to find better balance within my own head.

Was it Something that I Said?

Apparently, my simple response was enough of an invitation for the man to stop in his tracks, turn around a few steps and sit beside me on the same bench.

My immediate reaction — similar, I think, to the reaction of other people in that type of situation — was to suddenly feel quite uncomfortable.

In this day and age (and especially in traditionally “colder” places like cities in the North East US), we condition ourselves — out of the feeling of necessity; for the sake of our self-preservation — to be so cautious, protective, cynical and always on guard. Thus, what would ordinarily be a relatively simple and harmless social situation (someone sitting beside you on a park bench) becomes something more: a potential threat.

My immediate reaction of discomfort began an inner dialogue:

What did I say that made him turn around and sit next to me? Maybe he’s just trying to be nice? Is he strange? Is something wrong with him?

And so fear began to permeate every facet of my mind. Were I not such a… strapping, muscular, intimidating badass of a young man… I would have likely just stood up and left. When in doubt, we often abandon such uncomfortable, public social situations for it is the easiest choice and certainly the safest. 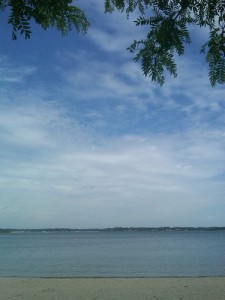 Was it really just a moment earlier that I had asked the world at large to consider the radical notion and positive implications of striving to cultivate genuine meaning in every single human interaction that we encounter?

I opened the book in my lap, The Art Of Happiness by the Dalai Lama Tenzin Gyatso and psychiatrist Howard Cutler (which has sparked a lot of thoughts, blog posts and video blog episodes of mine lately). Coincidentally, the pages to which I opened detailed Doctor Cutler questioning the Dalai Lama about how men and women can begin to treat others with compassion.

According to the Dalai Lama, compassion is one of the integral — if not the most important — components of fostering stronger friendships and relationships and establishing happier lives for ourselves and those around us.

The question for Doctor Cutler, however, was how we enable ourselves to feel and be more compassionate toward others — especially strangers.

Back to the park bench,

Here I was sitting beside a stranger whose very presence has sparked a natural chain of thoughts of worry, concern and self-preservation. I forced my mind to stop in its tracks. I paused for a moment and began to consider a mantra that I often recall whenever my ego feels insulted at another person’s selfish behavior or disregard for others:

Is it extreme to think in this way?

No: to consider that someone else may be suffering so incredibly is not to simply excuse or justify his/her indecent behavior, but rather to oblige oneself to feel compassion towards others.

In other words, your intent is not to blindly condone rudeness, but to deny your ego’s feelings of “offendedness” and to willingly inject a more compassionate attitude within you towards others.

How could I treat this man with compassion?

I began to think, “What if this man is in desperate need of help? What if he needs and longs for little more than the ears of another? Of someone? Of anyone?

I imagined that this human being beside me — no longer a “stranger” — was suffering his worst day.

What if his life, his faith in others, or his very future depended on one seemingly meaningless interaction with a stranger on a park bench one summer’s morning?

The odds or likeliness of it being true did not matter. When you envision another human being as truly suffering and in need of being saved, you realize that you have the choice to either hope to not make it worse, or try to make it better.

And if the difference was between me feeling uncomfortable or hoping to help the life of a human being in need, I would face it gladly (that’s something that it doesn’t take a Renegade to believe).

Just another soul longing for Happiness…

The man beside me made some passing remarks about what was occurring around us: a woman on horseback by the water’s edge; the size of the harbor across the bay, and so on. He saw the book, The Art Of Happiness, in my hands and brought up how he sees some people who always seem to be happy.

“I wonder their secret,” he asked (Was a lack of happiness, I wondered, what he was suffering from?).

I replied, according to the Dalai Lama happiness isn’t something you “have” or “haven’t,” but a state of being that can actually be practiced and conditioned, like any hobby or sport.

With practice, I continued, happiness can become the natural status quo, rather than a distant mindset that we live our lives struggling to attain. Minutes more passed before he finally stood, shook my hand, and went on his way.

I suppose I am an idealist (I’ve been described as such), but I think these kinds of interactions can reap radical goodness and happiness for others and ourselves — if we are brave enough to face them and fight the cynic within us that urges us to run away.

Such tests of our character and dedication to the ideals we hold dear can only come about when we are taken out of our comfort zones and gauge our natural reactions. Based upon the way I initially reacted, I’ve got quite a long way to go.

But in the mean time, if that man whom I’ll probably never see again was suffering on his worst day, I know I did my best to treat him with compassion.