Even when the journey sucks, you can still honor it -- by releasing yourself from judgments, expectations, and finding presence wherever you are. Even a long coast downhill.
April 9, 2013

“Hypothetically…” I began to say, which, coming from me, is generally never a good sign, “Let’s just say that a car reaches the top of Haleakala with a gas meter that reads, EMPTY…  what would the U.S. Parks Service recommend to those drivers, hypothetically?”

By now, you probably guessed it.

This was as un-hypothetical a situation as my “hypothetically cracked tooth” that I suffered a few weeks ago. It happened to Jacob and me last Wednesday as we embarked on a 4:30 AM drive up to the top of 10,032-foot Haleakala crater or the “House of the Sun,” a massive volcano that forms more than 75 percent of the island of Maui, to see the sun rise over the clouds.

We realized that we were running out of gas about halfway up the mountain.

And all this begs a very important and honest question:

What happens when the journey sucks?

What happens when the journey downright feels like shit, or makes you tense and nervous and undeniably anxious, or throws you for a complete loop? When the plan doesn’t work out as you had expected, and have to improvise on the fly?

How do you react?

And what, if anything, can you do to reclaim the journey as “the greatest reward” — even through the muck and the shit?

Between my work with The Literati Writers and recent travels between New York City and Rhode Island and now abroad to Hawaii over the last six months, I feel like a broken record riffing on the journey being the greatest reward.

To me, it’s all about how you align your minutes, hours and days with a truly rewarding sense of purpose, peace, joy and fulfillment.

What that actually means is taking the time to enjoy each day; to live from a place of truth that feels raw and real, and without expectation or apology; to honor your soulful wants, core needs and deepest desires as often as possible.

The journey becomes the reward when you engage in a concentrated practice of living what you believe and embodying your values in every interaction, conversation, smile or adventure — for better or for worse.

Of course, talking about “the journey being the reward” is easy when things are great.

It’s easy when you’re watching every sunset over a Hawaiian beach and meeting new people from around the world every day.

So what actually happens when the journey sucks? When you’re so thoroughly inconvenienced — as with a partially broken tooth, a missing author-interviewee, a goon picking a fight with you at a bar, or a car that’s running out of gas on top of a 10,032-foot volcano crater on Maui?

The dramatic sequence of events began with a little something like this:

We had come too far to turn back — and there was no shot that we were waking up at 4:30 AM again. A stressful half hour of “Do We Have Enough Gas to Reach the Top?” later, we reached the summit. It was 5:45 AM and a balmy 39 degrees fahrenheit.

Standing there above the clouds at 10,023 feet as the first light of the day hovered lightly over the horizon, the only thing on our minds was,

“How the hell are we going to get back down to the bottom?”

Is there gas up here? A siphon? Someone who will help us out? Are we shit outta luck? Will AAA drive all the way up Haleakala to give us gas — and is there any chance that it would take less than 6 to 8 hours for them to get here?

Minutes later, the sun crests over the horizon. That “sudden blip” of orange orb that jumps into view is always quite the sight to see. You’re literally seeing the Earth’s rotation; participating in an ancient ritual as old as time itself, honoring the day, the warmth, the provider.

And in that passing moment, there are no problems. 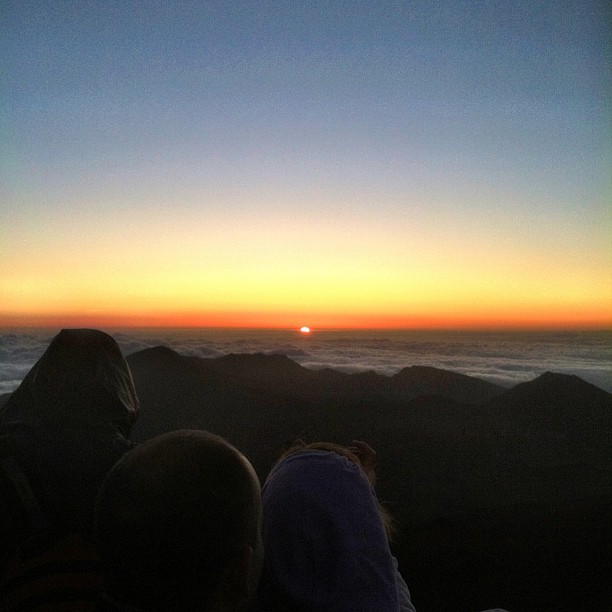 …until you gotta turn around and start rolling your car downhill.

Luckily for you, this is where we start to have some video evidence of what happens “when the journey sucks.”

Jacob started to record this video during our slow downhill roll over thirty miles of winding mountain roads to the nearest gas station. As you can tell by my first act as star of this video, (my middle finger – I dedicate that one to you Ash), I was not all that pleased with the videographic endeavor. Although, in my defense, I thought Jacob was taking a picture…

Be forewarned — the video is not all that exciting. But it is a real and somewhat hilarious documentation of what happens “when the journey sucks” — in this case, as two guys coast downhill for thirty miles, above the clouds:

When things go wrong, you just gotta ‘roll’ with it.

(That’s a rolling-car-downhill pun. Get it?)

But “rolling with it” is exactly what’s so tough when you’re improvising on the fly. When things go wrong, you lose your presence. You start to second-guess, question, overthink and worry. You get self-critical (even when it’s justified) and start to ask yourself things like “How did I let this happen?” and “What will people think if they find out about this?”

When things go wrong, or at least differently than expected, all you can do is make the best of that unplanned, even unwanted situation by doing your damndest to tune into the present moment.

For Jacob and me, it was the hilarity of laughing at ourselves and getting it on video for you to enjoy — rolling downhill and hoping for the best.

All you can do is forget everything else except where you are and who you’re with, presently. Forget your expectations and your assumptions. Forget the jokes you had planned out and the questions you had thought through, forget the pre-emptive nostalgia you thought you’d feel and let it go.

Forget everything that never happened and focus in on what is happening, now.

Find your presence. Breathe deeply. Remember where you are. Reflect on what matters — and how it could all be so much worse. How you’ll look back on this if you champion it — versus if you get dragged down into negative town.

And that’s how our expectations for the future mislead us. An expectation is a preconceived judgment, and from that judgment, I truly believe that some piece of the beauty of “simply living life” becomes lost. Expectations distract us from where we are. And who we get to be with. And what magic quietly lies in the spaces between where we strive to be and where we already are.

Even when the journey sucks, you can still honor it — by releasing yourself from judgments, expectations, and finding presence wherever you are.

Even a long coast downhill.